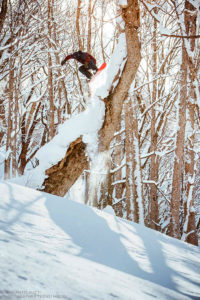 There are still some treasure trove remains in Japan. Unfound and untouched. Plenty of deep snow and terrains. Aizu has some of those traditional views and features, which is pretty familiar for Japanese people. However, against our expectations, the “dreamland” spreads not so far from us. “AIZU? Not that far from Tokyo? Umm, never heard about it, but that sounds pretty exotic to me. I will be happy to fly over this winter!” The whole trip had started with Skype talk with Antti Autti from Finland. Antti is a world’s leading professional snowboarder who has been renting an apartment, living in deep area of Japanese mountain range, and stacking numbers of footages in recent years. He used to go around competitions as a professional snowboarder in his career. However, after he stepped out from it, he has been spending all of his time for his new film project.

When they are filming, some troubles are sure to happen. During the season, Aizu area can continually and easily get over 60cm of fresh snow over night. When it comes to snowboarding, it sounds perfect. However, for filming, it is different story. “I have experienced one of the deepest powder in my life. Seriously, I needed a snorkel. It was pretty dry, but heavy enough to feel it under my foot. It was epic. To be honest, it was almost too deep for filming. Haha.” Moving around the mountains with heavy gears is not easy game. It was very valuable experience for them to mainly film near the ski resorts.

“Usually, we don’t film at ski resort. Because it will get tracked out by others, you know? But here in Aizu, not many people reach to the terrains that we demand. It is so easy to find untracked area. Do you know any other place like this?” Because of the historical background of mountain worship, there are only a few people go into backcountry area in Aizu. And there might be a same kind of story with side country riding as well. “Unlike other area in Japan, Aizu seems like very modest and opened for everybody. It is the real treasure trove.” Aizu area has completely different aspects that none of other mountains have.